The end of the summer gardening season is the perfect time to reflect on the year so far — specifically, summer garden lessons learned. Whether you’re a new gardener or have had many years of experience, we can all learn from each other. This is why I love to share my gardening lessons in real-time with you!

You may have already seen my lessons from this year’s spring garden so now it’s time for lessons from my summer garden. Click below to listen to this episode of the Beginner’s Garden Podcast, where I discuss these summer garden lessons, or continue reading below.

*links below may contain affiliate links.

Lesson #1: How to successfully start squash seeds indoors and transfer them to the summer garden.

I know many gardeners start squash from seed indoors, but I tried this years ago and it did not go well. Squash family plants (squash, zucchini, cucumbers, and melons) prove more difficult than other plants to start indoors. They don’t like to be moved, and if they do survive the transplant, growth is slow. I have always discouraged beginners from planting seeds from the squash and zucchini family indoors for this reason, recommending them to direct sow in the garden instead.

But this year, I broke my own rule. Inside my grow room, I started squash and zucchini seeds in soil blocks. Soil blocks are compressed soil without a container. This helps when transplanting the plants because they don’t grow root-bound and instead are ready to grow uninhibited in their new environment.

Here is a second reason I broke my own rule. We also have a big problem with the squash vine borer in my area. I know that I can avoid this issue if I delay my squash and zucchini planting until late July. By waiting, I can to circumvent the squash vine borer’s life cycle. That got me to wondering. If a late planting would avoid the borer, would an early planting do the same?

It turns out, both of my hunches proved correct. Using soil blocks avoided transplant shock. My squash and zucchini plants took off quickly after I transplanted them in the garden at the right time. AND, the early planted strengthened the plants where they gave me a huge harvest before any squash pests visited.

A few years ago, a veteran gardener suggested to me that I try planting icicle radishes around my squash plants to deter squash bugs. Honestly? I was skeptical. I know companion planting has merit, but many common companion planting ideas don’t work in every garden. But I did try it because I respect him and I thought, what’s the harm?

So, in the past two seasons, I planted icicle radishes along with my squash and zucchini. Strangely enough, in those two seasons, I did not have a problem with squash bugs. I still thought it was a fluke. And maybe it was.

But this year, I did not plant icicle radishes and squash together. And wouldn’t you know it? I saw more squash bugs this season than in any in recent memory.

Can I definitively say icicle radishes deter squash bugs? Of course not. Perhaps there’s another factor for which I can’t account. But it does leave me wondering. And I hope that more gardeners will try it and let me know their observations!

I love companion planting, not only for pest management but also to maximize my garden space.

As I learned the hard way this season, I need to be careful of the needs of each plant. This year, I planted peppers near tomatillos. I thought that the peppers could fit under the tomatillos, but I hadn’t considered the shade that mature, sprawling tomatillos would provide. As a result, my pepper plants looked stunted and did not produce.

After I removed the tomatillo plants, those pepper plants began growing almost immediately, and within weeks the peppers started producing.

For years I have supported my pepper plants by tying them to a single tomato stake. But this year I noticed more of a problem with bell peppers weighing down my plants to the point where entire stems broke off.

Next year, I will look at new ways to support my peppers. One friend has wide cages around her peppers that seemed to support them well.

Going back to Lesson #4 above, you may wonder, why after all these years is my pepper staking method not cutting it anymore?

Truthfully, my pepper plants have begun to grow bigger. And this, I believe is because I’ve gotten more serious about using organic fertilizer to support them in their initial growth.

Last season, I applied fish emulsion to my young peppers and they exploded in growth. I was skeptical, but I tried it again this year with the same result. After that first application when the peppers were a couple of in the ground, I repeated the application about every two weeks for a month or two. I now believe this supplemental fertilization is the main reason that my peppers have done so well.

I use many different succession and relay planting combinations. This year, I planted sweet potatoes for the first time. As I planned my garden layout, I searched for a way to incorporate planting sweet potatoes in my succession planting plan.

Knowing the needs of these two plants, I planted sweet potatoes on the perimeter of my peas as they were finishing their production. A few weeks later, I pulled out the pea plants and the sweet potato vines took over where the peas had been.

This year, I tried several ways of incorporating mid-season sowings. I am able to do this because I have a very long growing season. My frost-free period spans from early April until early November.

Every year, when my spring crops come out, many areas of my garden are often bare, since summer plantings had already been established in other areas.

This year I wanted to change that. I aimed for no bare soil after the spring crops finished. I planted a second planting of cucumbers, more bush means, and a late sowing of squash and zucchini. I started thinking about this last fall when I started planning my garden. I planned not only what I would put in my spring garden but what would go in its place when that crop was done.

The result? More crops, more harvest, and fewer weeds because the soil never stayed bare for long. Did I mention more harvest?

I planted a lot of new varieties and crops in my garden this year. I wouldn’t recommend this to a beginner because you want to gain confidence in the basics of your garden for a few seasons. But when you’ve gained some confidence, you can start testing new varieties.

Here are four varieties that I tried this year:

I had heard so much about cucamelons and I thought they were so cute. They look like a little watermelon but they taste like a cucumber. I learned that they are very pretty and they grow very well. BUT, the vines can take over. I’m glad I tried them, but I probably won’t grow them again.

This is a variety of cherry tomato that I wanted to try. I’m glad I tried and they were fun to grow. They didn’t succumb to common tomato diseases like some of my other tomatoes did. Overall, I didn’t use many cherry tomatoes so it wasn’t very practical for me. But, I did find a delicious recipe called warm cherry tomato salad in Jill Winger’s cookbook, The Prairie Homestead Cookbook. (You can hear more from her here and here.)

These are absolutely gorgeous pole beans. They are reddish-purple and very long. Seeing them come down from a trellis is simply the most beautiful sight.

These Chinese Red Noodle beans were very productive and they were able to withstand pest damage much better than some of my other beans.

The only problem with these Chinese red noodle beans came with the harvest. I didn’t know what to do with all of them! I did can and pickle some, but I bet we’ll stick with our normal varieties of pole beans in the future.

I’ve always grown black-eyed peas, but a gardening friend suggested over and over that I try zipper cream peas. He said the pods are bigger, they’re easier to shell, and they taste amazing. And I have to say he was right! They tasted a little like a cross between a lima bean and a black-eyed pea. I couldn’t get enough of them!

Lesson #9: Test the Soil of an Underperforming Vegetable Garden Bed

I am currently testing three different types of soil in my raised beds. As of this writing, I’m still testing and will have a podcast episode with the results in 2020, but here’s a teaser for you.

One soil performed so poorly that I didn’t know if the tomatoes were going to survive. (They ended up producing a meager harvest.)

After I pulled the tomatoes out of all three beds, I sent a soil test to my local university.

The results were so different for each bed, but the ph in the poorly performing bed was much higher than the others. My lesson is that if you have a bed that didn’t perform well, I highly recommend testing your soil. Fall is the best time! That way, you can take the time needed to correct any problems that the test may reveal.

No matter how long we have been gardening, it’s important to reflect on garden lessons from each season and year. (If you like listening about what I’ve learned this year, you can also take a listen to my lessons from last year.)

What summer garden lessons did you learn this season? 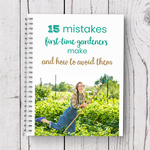 Grab this free download and not only discover some of the most common mistakes first-time gardeners make -- but even more important -- learn what to do to avoid those mistakes altogether!

Plus, I'll send you my "In the Garden E-mail" on Fridays, periodic updates on garden resources relevant to you, and get access to my entire bank of free garden downloads!

Success! Now check your email to confirm your subscription, and download your guide.

This week’s podcast interview was such fun to re

A new month = new weekly garden tasks! March is on

The only thing better than spending the day in the

I planted my Salanova lettuce in the garden today.

Today I took advantage of the sunshine (while snow

Just hang in there a few more days, lettuce babies