Where do you start? How do you DIY your own worm composting, and how do you get the right bin and the right worms?

On this episode of the Beginner’s Garden Podcast and in the article below, Emily Leuba from the Crazy Worm Lady shares all you need to know about the fascinating world of composting with worms. She answers the most frequently asked questions to help you get started in worm composting yourself!

Click to listen to our conversation or continue reading the article below. 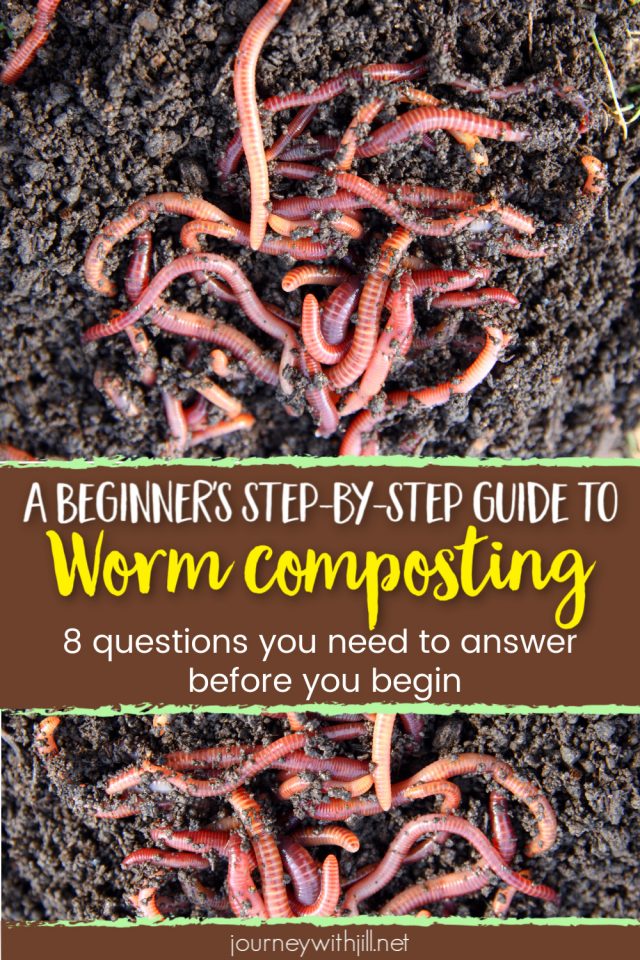 What are the Benefits of Vermicomposting?

There are other advantages to vermicomposting. The worm castings (the resulting worm compost) help prevent pests. One way they do this is by creating a barrier that keeps insects like aphids from taking over your plants. It also helps to prevent the damping off disease of young seed starts. Some early studies have shown that plants fed with worm castings are more nutrient dense that plants without.

What Kind of Worms are Used in Worm Composting?

Most worms are considered earthworms but not all earthworms will do well in composting. Red wrigglers are the gold standard for worm composting. They are the best for beginners because they’re so forgiving. You can also use night crawlers, specifically European or African varieties. There’s also an Indian blue worm that’s similar to the red worms but are a little more temperamental.

How Deep Should a Worm Bin Be?

Worms need about 1 square foot of surface area per pound of worms. Emily uses 10 gallon rubbermaid tubs that started with 1 pound of worms each and now hold about 3 pounds. Worms reproduce in captivity but they self-regulated so they will never out grow a container. They simply stop reproducing. So you can use anything that you already have around your house!

Be careful not to get too large a bin, though. It will get very heavy when it is full. You can have as little as 2-3″ of bedding material but up to 7-8.” Don’t get much deeper than that because it is hard to manage the compost quality.

How Many Worms Do You Need for a DIY Worm Compost Bin?

Most people start with about a pound of worms which is about 1,000 worms. But you could start with as few as 2 or 3 if you’re willing to be patient and wait for them to reproduce.

Where Do You Buy Worms for Composting?

You can search for composting worms or red wrigglers online. According to Emily, you may want to avoid sellers on Amazon because you may not get the healthiest worms. There are several reputable worm breeders available around the country. One is the Urban Worm Company.

What Can You Put in a Worm Compost Bin?

First, add bedding — at least 50% or more. You can use egg crates, newspaper, or shredded cardboard. Next, add about any fruit and vegetable scraps that you have. You can add your food scraps, especially your fruits. The worms love all of it! Avoid meat and dairy to avoid smell and oily and salty foods as well.

Depending on the size of your bins, you may add 1-3 pounds of food scraps and about 4 cups of bedding every week. You could add the food scraps and cover it with the bedding but the worms will eat it no matter what. Worms do well with some grit, like ground up egg shells or sand. You can’t put too much egg shell, but should add around 1-2 Tbsp with the food once a week.

How Do You Know When the Worm Castings are Ready to Use in the Garden?

When it is finished, the vermicompost looks like dark grains of rice. When you start a new bin, the first thing you’ll notice when the bedding starts to break down you’ll notice the black grains at the bottom of the bin. You can harvest any time as long as you remove the bigger pieces. When most of your food and bedding is gone, then it is ready to be used.

You can sift everything through a big sifter to keep the worms and big pieces and let the castings go through. Some people use a method called the migration method. When the bin is almost finished, they push all of the compost to one side of the bin and they feed only at the other side and the worms migrate to where the food is. When you feel like most of the worms have migrated, you remove the castings. This method is not as efficient and takes longer.

What Supplies Do You Need to Get Started in Vermicomposting?

For someone just getting into composting, use what you have! Find a bin that will be suitable. Add some worms in with some food scraps and bedding. You’ll want to add some grit like ground egg shells or sand to help the worms. You may want some gloves to protect your hand, a spray bottle to keep some of your bins moist, and perhaps a paper shredder to help make the bedding.

To get started, fill a bin with bedding and wet it so that it feels about like a rung-out sponge. You should add your egg shells and could add coffee grounds or tea bags. Then you can add food scraps. You’ll add your worms in last after the bin is prepared.

Do you compost with worms? What advice would you add? Comment below!

Do you get overwhelmed with garden planning?

Subscribe here for my best tips to plan your garden in just 7 days -- all for FREE.

Plus, I'll send you my "In the Garden E-mail" on Fridays, periodic updates on garden resources relevant to you, and you'll receive access to my entire bank of free garden downloads!

I’m doing a couple of new things this garden sea

My final seed order came in, this one from @seed_s

It’s the little things. Last year I finally got

Just a few more days!! If you'd like to harvest MO

It's hard to believe that three years ago I took a

My biggest seed order this year came from @johnnys