You should see the shock on people’s faces when they ask how I control insects in my garden and I reply, “I don’t use pesticides.”

Of course, I clarify that statement by explaining that I will, if necessary, resort to organic pesticide methods — but that’s only in extreme cases. Otherwise, I’ve managed to pull off growing a successful garden without pesticides.

How is this possible?

I do believe some luck is involved, but I can point to four factors I believe have played a critical role in my lack of devastating pest problems.

Call me naïve, but I believe in the perfect garden, nature itself–when given an environment in which to thrive–takes care of most major pest issues.

Let’s consider aphids for a moment. Though they can do devastating damage, they also have plenty of natural predators. I’ve never had a major problem with aphids, I believe due to my healthy ladybug population, along with other beneficial insects such as lacewings and syrphid flies — many of which you may never notice. These beneficial insects prey on aphids.

But to grow a healthy beneficial insect population, chemicals can’t be applied to the garden. Those same chemicals–and even organic pesticides–that kill the bad bugs kill the good ones, too.

But if aphids do get the upper hand, check out organic methods for aphid control here.

I also let vegetables flower and go to seed, which attracts beneficial insects. When a carrot, onion, cilantro, basil, or any other plant past its harvest-able stage sends up a flower stalk, it may not look appealing, but if it attracts an army of beneficial insects, it stays.

In my mind, zero pesticides means that the good insects that prey on the bad ones can thrive and grow. Any good predator needs prey, right? If we get rid of all the bad bugs, the good ones won’t have any food, and when you need the good bugs the most, they’re nowhere to be found.

*links below may contain affiliate links, which means if you click through and make a purchase, I will earn a commission at no extra cost to you.

According to Michael Pollan’s book In Defense of Food, gardens fed with chemical fertilizers aren’t as able to withstand attacks by pests as those grown under organic conditions.

I also work on creating an environment where the plants aren’t unduly stressed. For example, I mulch deeply in order to regulate moisture, which prevents drought stress during dry periods and moisture overload during wet ones.

A new approach I’ve learned to hasten the healthy growth of plants is to plant them at the optimal time. For example, one year I planted red beans shortly after the first frost passed. Just a row over, I planted green beans — with similar growth habit — a few weeks later. The red beans struggled with the fluctuating temperatures and rain, but the green beans grew larger than the earlier-planted red ones. It’s easy to tell which plant is more stressed.

There’s a lot of buzz in the garden world about certain plants repelling certain pests, but little scientific evidence has been found to back it up. However, gardeners believe it.

I can’t say for certain, but I do know when I plant basil near my tomatoes, for example, I don’t have problems with the tomato hornworm. Marigolds are said to offer similar protection to tomatoes and other plants. Here are other common methods of companion planting for pest control.

Spiders, snakes, and toads eat the enemies of my vegetables and fruits. When I see a spider, I rejoice. I know they’re good for my garden and they are welcome there. If I see a snake, I get chills up my spine but as long as it is a harmless garden snake (which it always has been), it gets to stay, too. Toads are always a welcome sight in my garden, and I leave them alone.

But, just one application of glyphosate (the active ingredient in Round-up) can decimate this important population.

When Bugs Get the Upper Hand

You must be wondering, then, do I not have any pest problems? Yes, I have had pest problems. My most significant problem has occurred at the hands of the squash vine borer, which has caused the death of almost every one of my squash, zucchini, and pumpkin plants.

Though I’m still testing different prevention methods, I’ve learned to plan several plantings of squash and zucchini throughout the season, and I’ve found the later plantings miss the squash vine borer’s life cycle in my area.

I also had issues with the Colorado Potato Beetle during my first two years. Hand-picking the beetles and squashing their eggs on the leaves by hand yielded the best results. In the last five years, I haven’t seen a beetle one. I’m still perplexed about that, but I’ll take it. My only thought is perhaps my large bird population gets hold of them before I see them.

It all comes down to accepting some of damage for the greater benefit of the little ecosystem going on in my garden. The healthier my garden is, the more likely it will take care of itself. And when my garden is healthy, I can sustain a garden without pesticides. 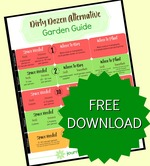 Make small strides for better health by growing five of the twelve most pesticide-loaded crops yourself. In this guide you'll learn the space needed to grow each of these crops (for fresh eating and/or preserving), as well as where to purchase and when to plant them. Shortcut your way to consuming fewer pesticides!

With your e-mail address, I'll also send you more tips to on growing organic and saving money, along with my information-packed "In the Garden" email on Fridays, periodic updates on garden resources relevant to you, and access to my bank of free garden downloads.

It’s the second harvest season for perennial her

Just harvested the sweet potatoes from my straw ba

My greenhouse has a name! 😆 My kids last fall s

This is a new insect in my garden — the harlequi

I cooked up my first fully mature tromboncino squa